The prices of several goods, including intermediate inputs such as cement, steel reinforcement bars, urea fertilizer, and broadband internet, are higher on average in the world’s poorest countries, including many in Africa  (Figure 1). This is important for two main reasons: higher prices for intermediate goods can slow economic growth; and this evidence runs counter to the general tendency for prices to rise with national income — a cornerstone of modern international macroeconomics.
Figure 1: Intermediate goods prices are higher on average in low-income countries in Africa. 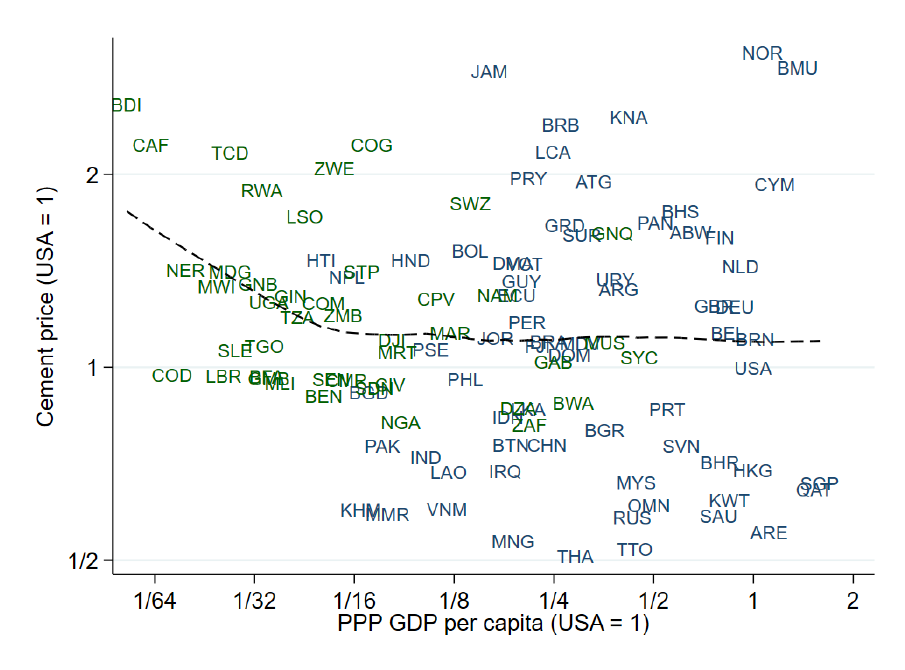 Note: Green markers indicate countries in Africa.
Source: Leone, Macchiavello, and Reed (2021)
Why we are seeing this unexpected pattern in price levels across different countries is not certain. One reason could be these higher prices reflect higher costs of production, or that higher prices might instead reflect a higher markup, as seen in markets with fewer firms and less competition. In a recent paper, my co-authors and I distinguish between these hypotheses by looking at the case of Portland cement using an empirical industrial organization model (see examples in other industries). According to our data, on average, 1.3 percent of GDP is spent on cement, making it vitally important to most economies. The model shows that the differences in marginal costs and markups contribute roughly to an equal share of the average difference in prices across economies. In 2011, Africa stood out as having the highest average US dollar cement price of any continent—the highest average marginal cost, and the highest average markup—at about 50 percent .  By 2017 the average price of cement in Africa had fallen by one-third, due to a three-fifths decline in marginal cost and a two-fifths decline in markup. This brought the average price of cement in Africa much closer to other continents. (Data are still forthcoming to test how prices adjusted during the pandemic).
Figure 2: Several hypotheses may or may not explain high cement markups in African economies 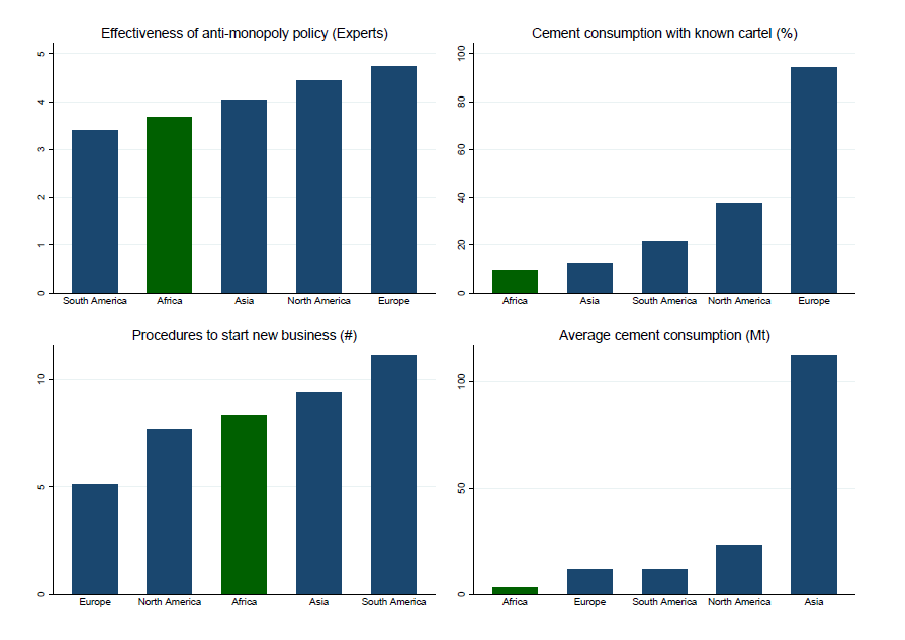 Source: Leone, Macchiavello, and Reed (2021)
A variety of economic forces can explain why markups on cement remain high in Africa. Higher markups might be explained by higher barriers to entry or by widespread cartel conduct across the continent. Figure 2 shows some initial hypotheses tested vigorously using the empirical industrial organization model referenced above. Consistent with this hypothesis, the upper left-hand panel shows that the effectiveness of anti-monopoly policy is highest on average in Europe and North America and the second-lowest in Africa, according to a survey of experts. A different pattern emerges in the upper right-hand panel, that shows the share of consumption sold under a known private cartel. Less than 10 percent of cement consumption is sold under a known cartel in the average African economy, while in Europe it is more than 90 percent. Taken at face value, these data suggest that Africa has less cartels than other continents. But these data are not conclusive because cartels in Africa are perhaps less known due to less effective antitrust policy, leading to fewer investigations. The model allows us to formally test whether firms in Africa appear to be systematically colluding, potentially due to less effective antitrust policy. Given supply and demand, we estimate that prices on the continent are consistent with imperfect competition, but not joint profit maximization by a cartel.
The bottom left panel of Figure 2 suggests the potential role of stricter entry regulations leading to higher markups. Africa is in the middle of other continents in terms of procedures to start a new business. Africa has more procedures compared to Europe and North America, but fewer than Asia or South America. This suggests entry barriers might play a role in higher prices. Using the model, we identify fixed costs from actual firm entry decisions and find them to be economically significant and in line with figures reported in industry publications. These costs are positively related to the number of procedures to start a business, but overall are not systematically higher in Africa compared to other continents, confirming that Africa does not have extraordinarily high barriers to entry.
A final hypothesis is that higher markups in African economies reflect a small market size unable to sustain more than a few competitors. The lower right-hand panel of Figure 2 shows that African markets have the lowest average cement consumption, indicating small market size. Having excluded the other hypotheses of cartel conduct, or excessive entry costs, our evidence suggests that limited demand, determined by the small average population of many African countries, can account for high markups in prices in African markets .
Overall, though this evidence comes from a single industry, it has important implications for understanding economic development in Africa. In contrast to theories suggesting Africa’s lower-income per capita is explained by `oligarchies’ led by major producers that use political power to erect excessive entry barriers against new entrepreneurs, our results are consistent with an alternative theory in which minimum efficient scale is the same across continents and market size plays a comparatively more important role in accounting for differences in economic development.
Our findings have important policy implications. Although we do not argue against further antitrust or pro-competitive policies, our results imply that governments need to focus on increasing the size of the market to lower prices of key intermediated goods rather than only changes in regulation. In another paper, we use similar industrial organization methods to explore demand-side constraints on development at the level of an entire economy and show at least two ways to increase market size: international integration agreements facilitate exports, and greater income equality, which raises the marginal propensity to consume from domestic income. In other industries with increasing returns to scale, achieving these policy goals could potentially encourage entry and reduce prices of goods.
Economist, Development Research Group at the World Bank
This site uses cookies to optimize functionality and give you the best possible experience. If you continue to navigate this website beyond this page, cookies will be placed on your browser. To learn more about cookies, click here.