Sign up for our daily newsletter
header-social
Secondary menu
Image 1 of 10
A sleek, slim 2-in-1 convertible but a couple of niggles undermine the Galaxy Book2 Pro 360’s appeal
At first glance, it would appear that the Samsung Galaxy Book2 Pro 360 is a high-end laptop bargain. No other 15in laptop offers the same level of features at the price and it’s an impressive performer with decent battery life, too.
That said, it does have some flaws that undermine its charge towards a five-star rating. What’s more, Apple’s forthcoming M2 MacBook Air is desperately likely to steal Samsung’s thunder. With the new M2-powered Air an odds-on favourite to grab the title of best laptop for most people, Samsung has its work cut out to convince consumers that the Galaxy Book2 Pro 360 is the better choice.
Buy now from Samsung
If your next laptop absolutely has to have a touchscreen and a 360-degree hinge, however, this could be the machine for you. It comes with a Full HD 1080p AMOLED display for vivid visuals and there’s a pressure sensitive stylus in the box as well, which is useful for annotating PDF files, sketching and note taking.
For this review, I’ve been sent the 15.6in version with the top-spec, 12-core Intel Core i7-1260P CPU, but it’s also available with a smaller 13.3in screen, in silver or burgundy finishes, and with a lower power Intel Core i5-1240P for those with smaller budgets.
Configuration tested: 12-core Intel Core i7-1260P CPU, 16GB RAM, 512GB SSD, 15.6in 1,920 x 1,080 AMOLED touchscreen, S-Pen stylus.
Prices start at a reasonable £1,099 for the 13.3in Core i5-1240P variant and rise to £1,499 for the 15.6in Core i7-1260P model reviewed here. That’s pretty good value for a machine this powerful, feature-packed, slim and light.
We haven’t reviewed any laptops with exactly the same selection of features as the Galaxy Book2 Pro 360 but the closest competition amongst the 2-in-1 crowd would seem to be the Lenovo Yoga 9i (7th Gen). Also a 2-in-1 convertible, the Lenovo comes with a stylus, a slightly smaller, but higher resolution, 14in 2.8K OLED display and the same Core i7-1260P CPU. It costs £1,450. There is also a 15in Yoga but it’s more expensive at £1,899 and is a couple of generations old now.
HP also has a 15in 2-in-1 laptop that comes with a stylus – the HP Envy 15-x360 15-eu0004na – and it’s much cheaper at £750. It’s also much heavier than the Book2 Pro 360 at 2.1kg, doesn’t have an OLED display and also features older technology – an AMD Ryzen 5 5500.
We haven’t yet covered Asus’ 2022 Flip S OLED range for 2022 but did review the 13.3in UX371EA last year, which also has an OLED panel and a buncled stylus, and is now available for a knock down £1,300. That’s still more expensive than the prices for the 13.3in Galaxy Book2 Pro 360, which start at £1,099. 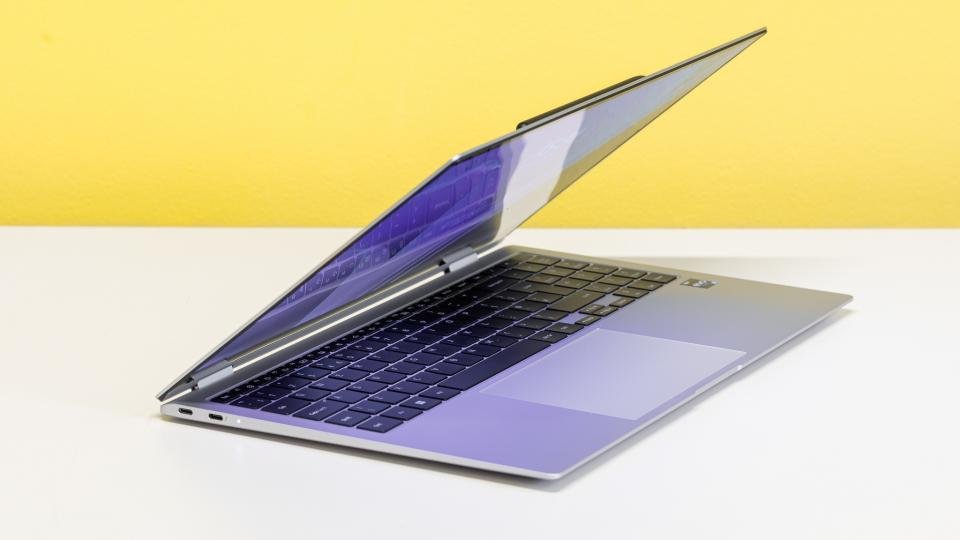 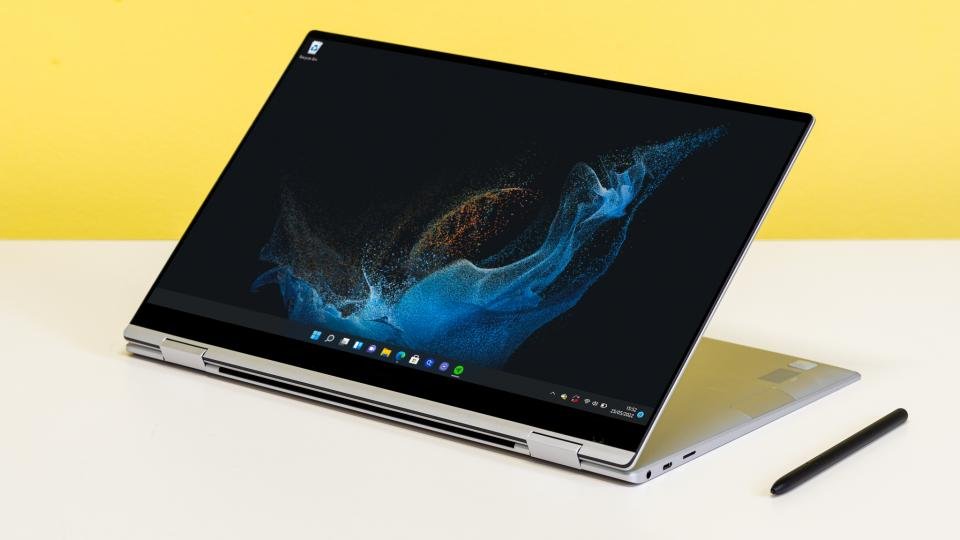 Image 10 of 10
The 360-degree hinge feels robust, and allows the display to be pushed all the way around so you can use the laptop as a touchscreen monitor or a tablet for sketching, note-taking and annotating. The rest of the unit feels well made, too.
Surprisingly for a laptop this skinny, there is a modicum of upgradeability. Pop off the four rubber feet on the underside, which are attached via clips not glue, undo four small Philips-head screws and, after a little gentle prying, the base of the laptop comes clean off, allowing you to add extra storage in the form of a small M.2 2230 SSD. You can also replace the existing M.2 2280 SSD should you need even more room for applications and files. 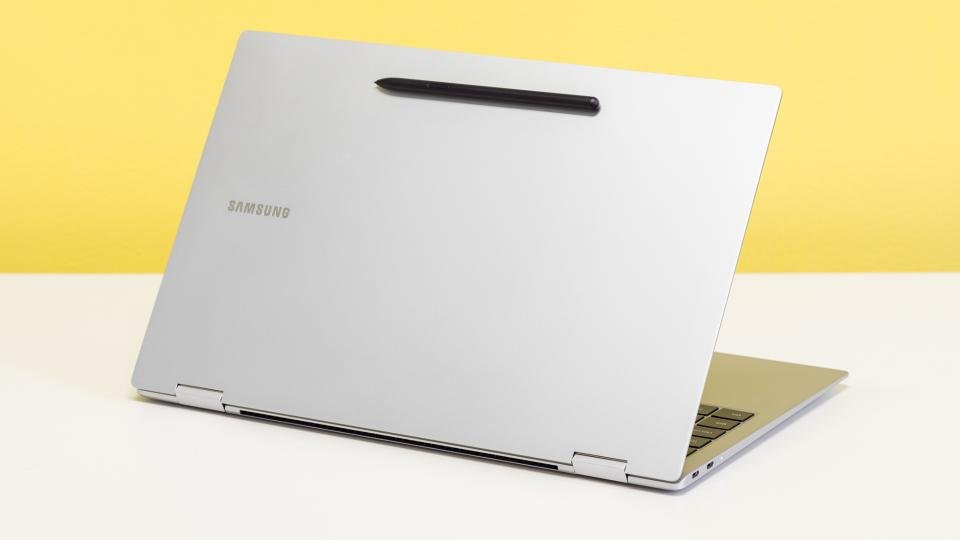 Image 4 of 10
However, if you were hoping for a stack of useful physical ports and connections, prepare to be disappointed. There’s a pair of USB-C ports and a single Thunderbolt 4 socket, plus a 3.5mm headset jack and a microSD card reader slot – that’s your lot. Wireless support is better, however, with support for the latest Wi-Fi 6E standard (and Bluetooth 5.1) via an Intel AX211 Card.
Perhaps more disappointing is the fact that there’s no slot to store the supplied S Pen stylus in. There’s a magnetic area on the lid you can attach it to while you’re working but you’ll need to find somewhere else to store it when you pop it away in your laptop bag.
Buy now from Samsung
That’s a small irritation but not the only one. I also found that the Book2 Pro 360’s touchscreen suffered from rather poor palm rejection. Actually, that’s not entirely accurate: it was my forearm that caused the most problems and I found it would often activate the notifications menu as it brushed against the edge of the display. If you’re aware of the problem you can minimise the issue but it’s clearly far from ideal.
The keyboard, fortunately, has no such issues. Sure the keys are a little shallow on travel but they have a good dig of feedback and are comfortable to type on. The left Shift and Ctrl keys are on the small side, as are the cursor keys, but otherwise there’s nothing problematic about the layout and Samsung has even found room to squeeze in a number pad to the right. It’s a little cramped, with smaller 0 and Enter keys than you’d normally expect but I’d rather that than not have a number pad at all. 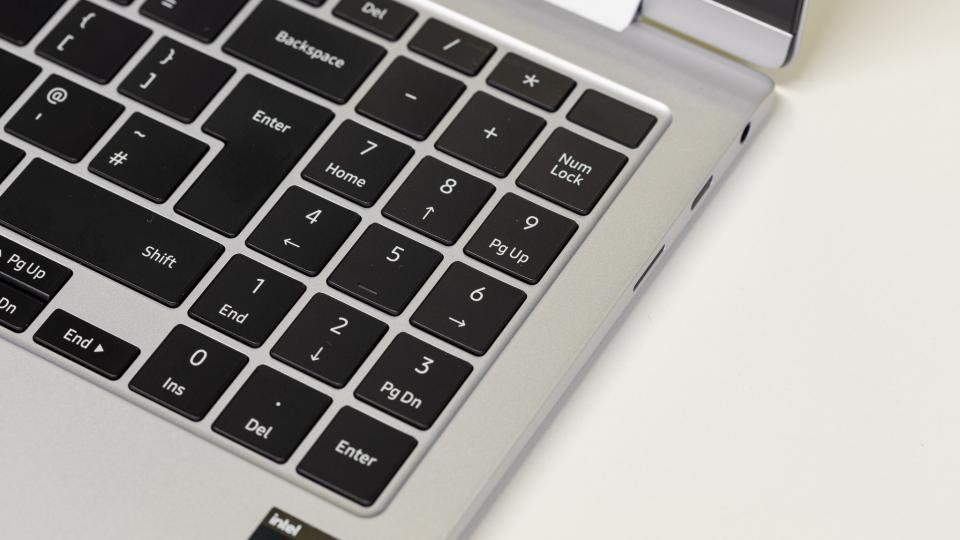 Image 7 of 10
The touchpad is reliable and sensitive, too, and doesn’t suffer from the annoying accidental activation issues found on some touchpads. It’s a shame, though, that the webcam lets the side down. Despite offering a seemingly crisp 1,920 x 1,080 resolution, it produces rather soft, over-saturated images.
READ NEXT: Our favourite webcams
The Book2 Pro 360’s display is a mix of the good and the not so good. On the good side it employs AMOLED technology and that means vivid colour reproduction and an effectively perfect contrast ratio; good news for watching HDR content on Netflix, Disney Plus, Amazon Prime and so on. It’s also a pretty bright screen, hitting peaks of 383cd/m2 in testing.
It’s also good to see Samsung has included pre-calibrated profiles for sRGB, AdobeRGB and DCI-P3, so creative professionals shouldn’t have to worry about running their own calibrations. The display is pretty colour accurate, too, with average Delta E colour difference scores of 1.8 in the AdobeRGB mode, 2.1 in DCI-P3 and 1.2 in sRGB. 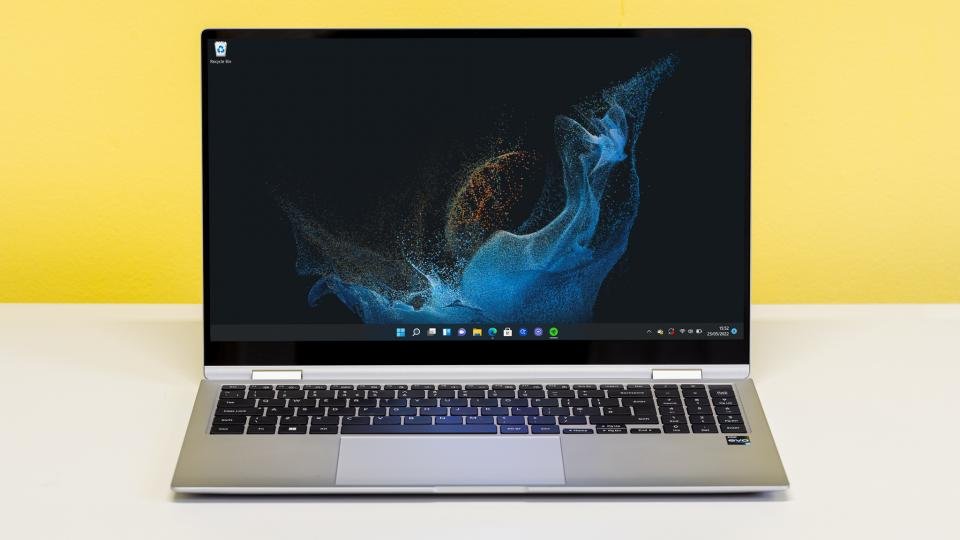 Image 2 of 10
The not so good thing about the display is that Full HD (1,920 x 1,080) resolution. This won’t be so much of an issue on the smaller 13.3in Book2 but on this 15.6in model, text and small icons take on a slightly grainy appearance that’s clearly visible at normal viewing distances. It’s also only a 60Hz display, which feels a little backward when so many other manufacturers are moving to 90Hz and above.
The AKG speakers, likewise, are pretty decent for a laptop. They reach reasonable volume without sounding too raucous or tinny, but the sound isn’t full-bodied enough for listening to music. They’re still laptop speakers at the end of the day – connect a pair of Bluetooth headphones or a speaker and you’ll get far better audio quality.
READ NEXT: Best Bluetooth headphones
Given the Galaxy Book2 360’s slender dimensions, it’s no surprise that it can’t match workstation or gaming laptops for raw performance. If you push it too hard, it does get quite warm to the touch, too. However, raw performance is respectable on the 14-core Core i7-1260P-based model I have here and it’s even quick enough for the odd casual gaming session.
In our 4K media benchmarks, the Core i7-1260P pushes it to the top of the charts among lightweight productivity laptops. In the multitasking element of the Geekbench 5 test, it’s a clear winner, beating the M1 MacBook Air and even the AMD Ryzen 7 6800U-powered Asus ZenBook 13 S OLED I reviewed recently.
For graphics-intensive applications, meanwhile, you have Intel’s Iris Xe integrated GPU and this lags behind both the MacBook Air and the Asus ZenBook 13 S OLED in the GFXBench Car Chase tests.
Storage speeds from the 512GB SSD are okay, with sequential read and write speeds of 2,039MB/sec and 1,678MB/sec, but you can get better at this price.
For a slim and light laptop, however, long battery life is essential and, on this front, the Samsung Galaxy Book2 Pro 360 hits the mark. In our video rundown test it lasted an impressive 13hrs 16mins, which puts it only an hour or so short of the superb performance put in by the M1 MacBook Air. That’s dramatically longer than most lightweight Windows machines we’ve tested and particularly impressive for a large 15.6in machine.
Buy now from Samsung
Thin, light, quick and long-lasting: there are plenty of things to like about the Samsung Galaxy Book2 Pro 360.
There are, however, some issues that prevent it from winning an award. For starters, I’d like to see a screen with a higher resolution and refresh rate on a laptop costing this much. The stylus support, too, is glitchy and the meagre selection of physical ports and sockets is rather limiting.
If nothing less than a large-screened 2-in-1 convertible will suffice, the Samsung Galaxy Book2 Pro 360 is worth considering, partly because of its keen price and partly due to the conspicuous lack of competitors. If you’re happy to make do with a standard laptop, though, you should spend your money elsewhere – there are far better deals to be had.
The best budget smartphones: The best cheap phones in the UK
The UK’s best broadband providers
Best Samsung phone 2022: Which Galaxy is right for you?
The best smartphones you can buy in 2022
Best mid-range phone: Astonishingly affordable smartphones
Best Android phone: The best budget, mid-range and high-end
The best printers to buy from £42
The best 4K HDR TVs you can buy
The best Wi-Fi extenders to buy from £35
The best Freeview PVR and set-top boxes
DJI OM 5 review: The most refined smartphone stabiliser yet
Sony Xperia 1 III review: Nearly brilliant
Fitbit Versa 3: Frustratingly close to perfection
Amazon Echo 2020 review: A brilliant smart speaker
Eve Original Mattress: Firm and supportive
Acer Swift 3 (2022): The best affordable compact laptop
The Microsoft Surface Laptop SE is lightweight and likeable
The Asus ROG Zephyrus G14 rivals the MacBook Pro 14
Dell Inspiron 16 Plus review: A 3K do-it-all bargain
Samsung Galaxy Book2 Pro 360 review: Silver bullet
The best Windows, Apple and Chrome OS laptops to buy
Acer Chromebook 314: Too much Chromebook for too little?
Asus TUF Gaming F15: Superb value, great performance
Asus ZenBook S 13 OLED (2022): A mighty fine ultraportable
The best Wi-Fi extenders to buy from £35
Copyright © Expert Reviews Holdings Ltd 2022. All rights reserved.
Expert Reviews™ is a registered trade mark.