While King Charles III will accede to the throne through a ceremony on Friday, his coronation remains months away

While King Charles III will accede to the throne through a ceremony on Friday, his coronation remains months away

Queen Elizabeth II, the longest-reigning monarch of Britain, died on September 8 at the age of 96, at her Scottish estate, Balmoral Castle. The end of her 70-year reign set in motion an elaborate plan for the next 10 days, honed clandestinely for decades but only reported first in 2017 by The Guardian and then Politico in 2021.

The protocol, including planned ceremonial and political events and the succession of the throne, is known as Operation London Bridge. The elaborate plan also considered the possibility of the Queen’s death in Scotland, at the Balmoral, the retreat which is long considered one of her favourate places; this plan is known as “Operation Unicorn”.

The part of the drill that already took place on September 8 included first communicating the news of the death to the Prime Minister, Liz Truss, by the Queen’s Private Secretary. As planned, the news was then sent to the 14 commonwealth countries where the Queen was Head of State, and to the other 38 nations of the Commonwealth.

With her death, her eldest son Charles, the former Prince of Wales, immediately became monarch and will lead the country in mourning as the new King. He will be known as King Charles III.

On the day after D-day, King Charles III is expected to return to London from Balmoral and address his new subjects in a pre-recorded inaugural broadcast. Also on Friday, the new king is due to hold his first audience with Prime Minister Liz Truss, who was only appointed on Tuesday in one of the queen’s last ceremonial acts before her death. He will also meet officials to decide on funeral plans and the length of the royal household’s period of mourning, which is expected to last a month.

A “spontaneous” Service of Remembrance, in the presence of the Prime Minister and a small number of ministers is also due to take place at St. Paul’s Cathedral in London.

The Parliament will pay tributes to the Queen in the House of Commons and all parliamentary business will be suspended for 10 days. Elizabeth Alexandra Mary was born on April 21, 1926. The young princess never expected to ascend to the throne: it was only after her uncle King Edward VIII abdicated in 1936 because of his love for American divorcee Wallis Simpson that the crown passed to her father, George VI, when she was 10. In picture Princess Elizabeth, centre, age 11, appears on the balcony of Buckingham Palace after the coronation of her father, King George VI, right, in London on May 12, 1937. Princess Elizabeth was 13 when she fell for her 18-year-old third cousin Philip in 1939. Two years later, she married the Danish-Greek prince. In picture, Princess Elizabeth and Philip, Duke of Edinburgh pose on their wedding day at Buckingham Palace in London on November 20, 1947. 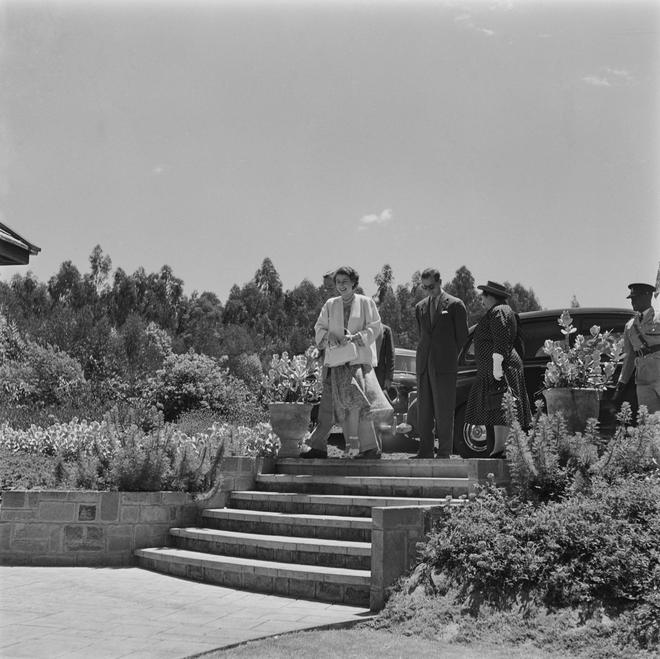 She was just 25 when her father died and she became Queen Elizabeth II on February 6, 1952, while on tour in Kenya with her husband Prince Philip. In picture. Princess Elizabeth and Prince Philip arrive at Sagana Lodge in Nyeri County, during a Commonwealth visit to Kenya on February 5, 1952. The following day, during a walk in the grounds on the royal couple’s return to the lodge from the Treetops Hotel, Prince Philip would break the news to Elizabeth that her father, King George VI, had died during the night and that she had acceded to the throne. Elizabeth became queen in 1952 and was crowned on June 2, 1953 in a televised ceremony in Westminster Abbey, becoming the first queen in her own right since Queen Victoria and the 40th monarch in a royal line that traces its origin back to William the Conqueror in 1066. Queen Elizabeth was on the throne for most of the Cold War from the death of Soviet leader Josef Stalin. During her reign there were 14 U.S. presidents, from Harry S. Truman to Joe Biden, and she met all of them except Lyndon Johnson. In picture, Queen Elizabeth II is escorted by U.S. President George W. Bush past a painting of former President Harry S. Truman from the residence area to the Grand Foyer of the White House prior to State Dinner for the British monarch and Prince Philip May 7, 2007. During Queen Elizabeth II’s 70 years on the throne Britain underwent dramatic change. The austere postwar 1950s gave way to the swinging 60s, the divisive leadership of Margaret Thatcher in the 80s, Tony Blair’s three-term New Labour era, a return to economic austerity and then the COVID-19 pandemic. Photo combo shows Queen Elizabeth II during the State Opening of Parliament in April 1966 and November 15, 2006. Queen Elizabeth II’s years on the throne were often far from smooth sailing. She famously described as an “annus horribilis” the 40th anniversary of her accession in 1992 after three of her four children’s marriages failed and there was a fire at her Windsor Castle residence. In piture, Queen Elizabeth II is accompanied by a fireman as she tours the scene of a major fire at Windsor Castle on November 21, 1992. The death in 1997 of Princess Diana, the divorced wife of Elizabeth’s eldest son Charles, inflicted even more damage on the family’s public prestige. In picture, the Duke of Edinburgh and Queen Elizabeth II on September 5, 1997 view the thousands of flowers and tributes left outside Kensington Palace in memory of Diana. In 2022, at the start of a Platinum Jubilee pop concert, she again won huge plaudits for a pre-recorded comic sketch with Paddington Bear, in which she told the famous fictional character that she always kept his favourite snack — a marmalade sandwich — in her ever-present handbag. Picture, released by Buckingham Palace on June 4, 2022, shows Queen Elizabeth II and Paddington Bear having cream tea at Buckingham Palace, taken from a film that was shown at the BBC Platinum Party at the Palace Photo: Buckingham Palace via AFP Queen Elizabeth II was said to crack jokes with world leaders, enjoy an easy familiarity with long-serving Commonwealth heads of government, and relish a wager on race horses. Racing was an enduring passion. Photo shows Queen Elizabeth II and Prince Philip arriving for the first day of the Royal Ascot horse racing meet in Ascot, west of London on June 14, 2016. Queen Elizabeth II was also accompanied for most of her reign by her corgi dogs, which earned a reputation for snapping at the heels of royal retainers and were descended from the dog called Susan she received as an 18th birthday gift from her parents.
in the picture, Queen Elizabeth II is seen walking in the private grounds of Windsor Castle on steps at the rear of the East Terrace and East Garden with four of her dogs: clockwise from top left Willow (corgi), Vulcan (dorgie), Candy (dorgie) and Holly (corgi), in this official photograph released by Buckingham Palace to mark her 90th birthday on April 20, 2016. Photo: Buckingham Palace via Reuters 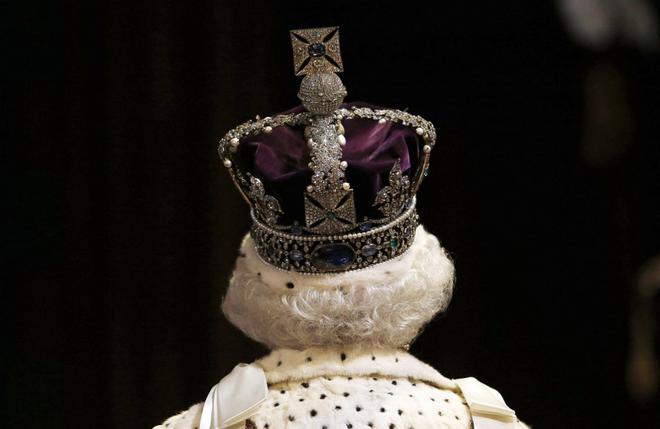 In September 2015, Queen Elizabeth II overtook Queen Victoria to become the country’s longest-ever reigning monarch, an achievement to which she said she had never aspired, and the following year there were more celebrations for her 90th birthday. Picture shows her, wearing the Imperial State Crown, proceeding through the Royal Gallery as she attends the State Opening of Parliament in the House of Lords at the Palace of Westminster in central London on May 27, 2015. Queen Elizabeth II’s marriage to Philip, the Greek prince she wed aged 21, stayed solid for 73 years until his death in April 2021. In the picture, Queen Elizabeth II takes her seat for the funeral service of Prince Philip inside St. George’s Chapel in Windsor Castle on April 17, 2021. “It has been said that ‘the art of progress is to preserve order amid change and change amid order’, and in this the queen is unparalleled,” then-Prime Minister David Cameron said in a speech to parliament in 2012. “She has never shut the door on the future; instead, she has led the way through it.” In this file combination of pictures created on October 29, 2021 shows the various colourful outfits worn by Queen Elizabeth II throughout the decades.

As part of Operation Spring Tide – the codename Charles’ succession to the throne as King Charles III, he is due to meet the Accession Council, a group of senior officials and privy counsellors, that proclaims King Charles as the new sovereign, at St. James’s Palace. A proclamation will additionally be read at the Royal Exchange. This ceremony is different from the coronation, which is due to take place months later. Queen Elizabeth II’s coronation had taken place 16 months after King George VI’s death. According to The Guardian, Flags in Britain will be at full mast for the Accession ceremony and would remain like that for another day before coming back to half-mast.

Charles’ wife, Camilla, the Duchess of Cornwall, will be known as Queen Consort — a title that came with Queen Elizabeth II’s blessing after years of contention.

The Queen’s coffin, is expected to to leave the Balmoral in Scotland and reach the Palace of Holyroodhouse Edinburgh to lie at rest in the throne room. A service, attended by the Royal Family would be held at the St. Giles’ Cathedral, which will be open for public for a day, after the service.

The coffin will then be flown to London, where it will be received by the prime minister and members of her Cabinet. It will then be kept in the throne room at the Buckingham Palace.

The new king will start off his tour of the United Kingdom, beginning at the Westminster Hall, where Members of Parliament will give him a “Motion of Condolence”. He will then head to the home nations of the UK, starting with Northern Ireland, and culminating in Wales. He will receive a short ceremony in both places, and will attend prayer services at St Anne’s Cathedral in Belfast and Llandaff Cathedral in Cardiff, respectively.

Rehearsals will be held for the procession and parade that will transfer the Queen’s coffin from Buckingham Palace to the Palace of Westminster via a ceremonial route. Once the coffin arrives at the palace, a big memorial service, a prelude to the state Funeral on Day 10, will be held.

After this, the coffin will lie in state for five days, when the Westminster Hall will be open for the public to pay their respects.

The new king will receive all the royal families on the eve of the funeral. The ceremony will be held on the tenth day at Westminster Abbey and is considered the national day of mourning for Britain. The hour-long ceremony will culminate in two minutes of silence across the nation. Post the funeral, the coffin will take a ceremonial route to Hyde Park, from where it will be carried on the state hearse to the Windsor, as per The Guardian. After a committal service at St. George Chapel, the coffin will then be lowered into the Royal Vault.

In policy reversal, Putin backs off threats at Nato expansion