About three decades ago, pick-to-light technology appeared on the scene and was heralded as a game changer. And it was. Easy to follow and hands free, light-directed picking made for quick and easy onboarding and served to increase efficiency, reduce costs, increase picking accuracy and improve overall productivity. The return on investment was relatively swift, too, making the systems attractive to upper management.
Right on the heels of pick-to-light was the introduction of put-to-light, essentially the reverse operations. The put version directed workers to the right slots to place items, again reducing human error and increasing the speed at which associates could accomplish their tasks.
Today, light-directed operations have evolved well beyond their original versions. The technology has found use cases beyond pick modules, expanding into pick-to-cart operations in e-fulfillment warehouses, goods-to-person workstations and putwalls in order consolidation and packing operations, to name a few.
Many warehouses are now doubling up on technology that works in conjunction with pick/put-to-light. These multi-modal approaches combine a host of complementary technologies, including voice and bar code scanning, to enhance the productivity quotient. This next generation set up is where many warehouses are now finding the most bang for their buck.
And, we’re also seeing the introduction of wireless light-directed solutions to accommodate the increasingly mobile warehouse worker. 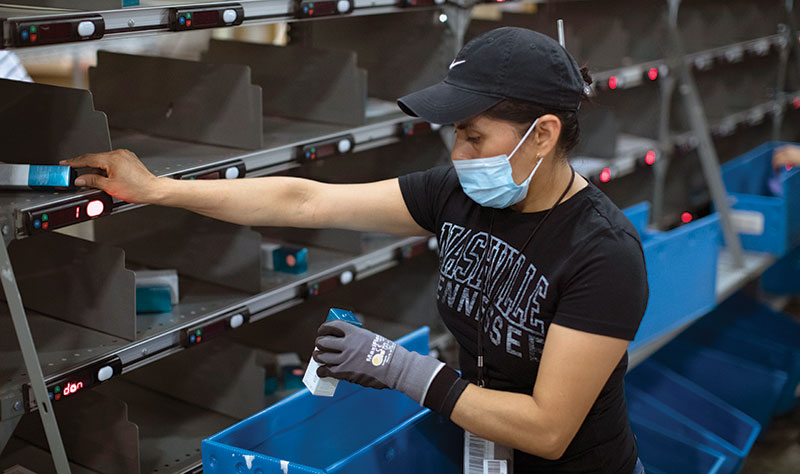 Put-to-light directs workers to the right slots to place items, reducing human error and increasing the speed at which associates can accomplish tasks.
Some of this is driven by the pandemic, says Peter Gerbitz, systems sales manager at Matthews Automation Systems.
“When e-commerce upticked so quickly at the start of the pandemic, customers scrambled to find solutions to help them keep up,” Gerbitz explains. “This drove adoption of multi-modal approaches. Now companies have some breathing room, however, to carefully evaluate situations and the right solutions.”
In fact, multi-modal approaches are increasingly becoming the norm, according to Dan Hanrahan, president of Numina Group. Hanrahan says that Numina’s systems work seamlessly with technology like voice, hands-free Bluetooth scanners and the like.
“Really over the last five years, when we upgraded our technology, we’ve integrated all the devices into our application,” Hanrahan explains. “We haven’t put in any applications in the last few years without hands-free scanning that starts the orders. Then we reinforce what they’re seeing on screens.”
This is the hybrid approach to picking today. The operator might use a hands-free scanner to begin, then the lights correspondingly direct them to the pick location. Once the operator has selected the item and pushed the traditional button to confirm, a message shows up on a screen to verify the pick. “The display provides the color, the quantity and the confirmation function,” Hanrahan says. “You can have the traditional push button confirmation, or you can scan the bar code to validate the pick. Hands free is readily built into the solution.” 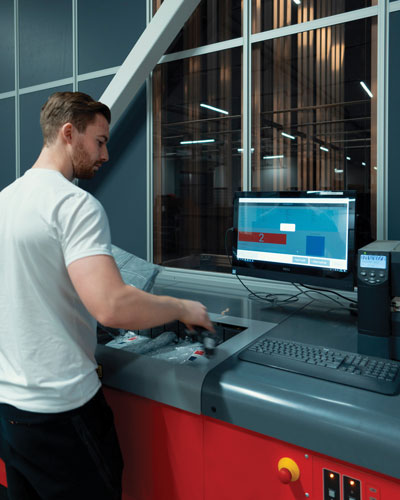 One example of this approach is Numina’s customer United Medco, a national wholesaler and distributor specializing in support and full-service warehouse order fulfillment of pharmaceutical and wellness products. In a growth spurt, the company’s product catalog expanded from 500 to more than 1,200 SKUs.
Struggling to keep up in an efficient manner, United Medco turned to Numina Group to design an optimized zone routing pick-to-conveyor system. Complementing that was a pick-to-light system with hands-free bar code scan validation.
Rather than operators literally walking miles around the warehouse to pick products, the new system allowed operators to pick, pack, ship and ensure quality control along the conveyor, directed by the pick-to-light system.
By adding in the bar coding, employees don’t need to read pick tickets, which has significantly expedited the onboarding process, making them productive on day one. And, because the picking takes place in zones, each has a pick-to-light unit with color-coded lights attached to the product bins. After picking, the operator pushes the carton along the conveyor to advance it to the next zone.
The combined United Medco bar code/pick-to-light system has reduced the company’s labor costs by 60%, doubled productivity and increased picking and order accuracy to better than 99%.
Bar coding that’s paired with light-directed operations can look like a traditional handheld gun, ring-mounted or wrist-mounted device, all of which deliver the hands-free boost to operations. “This is where most dual modality exists today,” says Mark Wheeler, director of supply chain solutions at Zebra Technologies. “Accuracy is important, and so even if the light directs to a location, you can still scan the SKU to prevent a mistake.”
A multi-modal approach to light-directed systems goes beyond bar code scanning, however, and sometimes into futuristic technology. Most systems today can double up with voice-directed orders, smaller robotics like autonomous mobile robots (AMRs), vertical lift modules, mobile carts, and even smart glasses that send light cues to a pick location. 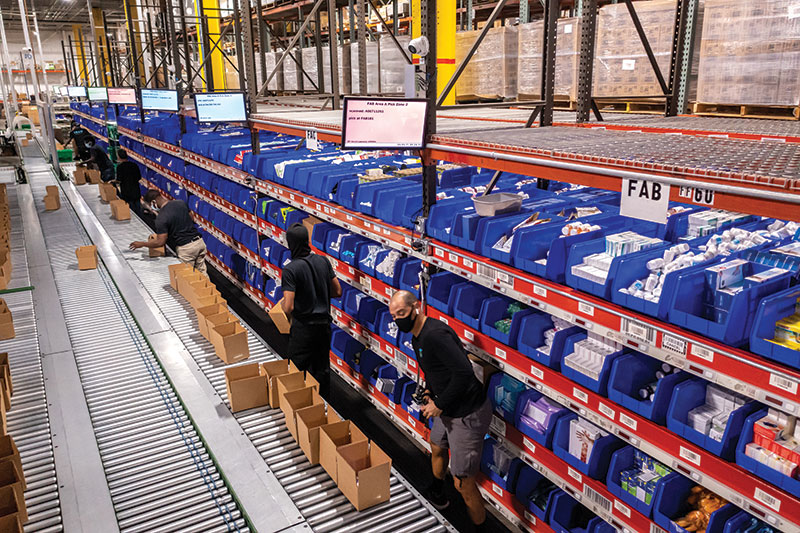 Multi-modal approaches are increasingly becoming the norm. Some systems work seamlessly with technology like voice, hands-free Bluetooth scanners and the like.
“Assisted reality is where smart glasses replace hardware requirements and create similar functionality based on software visualization,” says Andreas Lowe, head of product partnerships and integration at AutoStore.
Other modalities can include a combination of lights and smart watches or gloves. Lowe says these have the potential of opening jobs to a new demographic by decreasing the complexity of an order for the operator.
Automated storage and retrieval systems (AS/RS) coupled with a putwall assist is another newer combination. Lowe says this might play out like the following example:
First, an operator receives a bin with a SKU that will be part of five different orders. Behind the picker, several putwalls hold 20 orders each, equaling 80 orders total if there are four putwalls. The operator puts five pieces into five totes or boxes and put-to-light enables the operator to immediately recognize the locations and put the items into the totes. No searching is required, and the put-to-light system helped avoid mistakes and reduce scanning times.
When it comes to robots, there are still limitations, but they have a place. “Integrating lights with robots looks mostly like a fetch bot application,” says Wheeler. “You might pick-to-light, then hand the product off to the AMR to bring goods to another location or employee.”
A big plus to multi-modal picking/putting is that employees enjoy their work more, says Wheeler, basing his viewpoint from employee ratings. “Not only does management view it favorably, but so too do end users, which can help with retention,” he says.
Light-directed solutions have traditionally been wired. That’s because the typical use case is in a pick module, a putwall or a more expansive goods-to-person workstation. “If we have a customer who runs multiple shifts, our approach is still traditional, wired systems,” says Hanrahan. “They’re extremely simple to install, you can train maintenance to support it in about an hour, and there’s not much thinking required if you have to swap a unit out.” 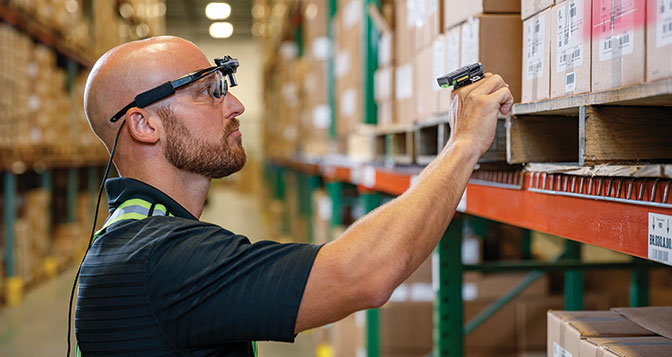 Bar coding that’s paired with light-directed operations can look like a traditional handheld gun, ring-mounted or wrist-mounted device.
Workers are increasingly mobile, however, including pick-to-cart solutions and mobile putwalls that give a DC the ability to expand or contract a putwall area according to order volume.
In those applications, wireless lights bring a lot to the table. “One of the impediments to adoption has been the degree of inflexibility of wired systems,” says Wheeler. “We’re seeing a lot of demand for wireless solutions today.”
Wireless options are more prevalent than ever and are helping to solve the inflexibility issue. “Long-last batteries have removed the requirement for wiring,” says Lowe. “Battery lifecycles now amount to three to five years.”
Despite the advancements associated with light-directed applications, companies still need to steer clear of technology for technology’s sake.
“With any type of system or technology, you have to evaluate your order profile and choose technology appropriate to it,” says Gerbitz. “We take the approach of understanding what the product, processes and orders look like before making recommendations.”
Return on investment is key, too. “Evaluate where you are today and where a better process is going to provide savings,” says Hanrahan. “Then look at the flexibility of technologies to see where it will return on investment. We take a holistic approach to the ROI, looking at entire picking, packing and shipping processes and see what the ROI can be overall. Often that might be as high as 40%.”
Lowe has this to say: “Determining how ROI will be impacted by these tools depends on a few variables and calculations as they’re unique to the needs of the organization and the warehouse,” he says.
In the case of his earlier putwall example, companies generally use it to increase the batch factor. The higher the batch factor, the lower the number of totes there are to be presented at a workstation. With fewer totes, the fewer robots “In most cases, this is one of the cost drivers for a system,” Lowe says.
Increasing budgets and consumer demands drive growth.
Thu, June 9, 2022 – 2:00 pm EDT

Vitamin B12 deficiency: How does your mobile phone feel in your pocket? The 'subtle' sign – Express