Sign up for our daily newsletter
header-social
Secondary menu
Image 1 of 6
AMD's Radeon RX 6600M GPU and a Full HD display are the perfect budget gaming combo
Trying to get a decent gaming laptop for under £1,000 has never been an easy thing to do. Take a quick look on Amazon and you seem to have a good selection to choose from but, once you’ve ignored the machines fitted with the Nvidia RTX 3050 and 3050 Ti GPUs the list starts to look much shorter.
Personally, I think calling anything built around Nvidia’s puniest GPU a gaming laptop is stretching the meaning of the phrase because 4GB of vRAM (the most the RTX 3050 supports) is just too little for today’s AAA games.
For decent gaming, you need at least either the Nvidia RTX 3060 or the AMD RX 6600M GPU and 8GB of vRAM. Machines with the latter are becoming more common and the latest all-AMD gamer to come our way is Lenovo’s Legion 5 AMD Advantage Edition.
Buy now from Currys (Ryzen 5) Buy now from Currys (Ryzen 7)
Think discrete laptop GPU and you typically think Nvidia but AMD also has a decent range of GPUs in its latest RX-series. The latest addition to the lineup is the most affordable, the Radeon RX 6600M, a mid-range GPU designed to bring reliable 1080p gaming to laptops that don’t cost an arm and a leg. We’ve already tested the RX 6600M in the HP Omen 16 but it didn’t feel entirely at home there – a GPU designed for 1080p gaming in a laptop with a 1440p panel. Here, it is much more comfortable. 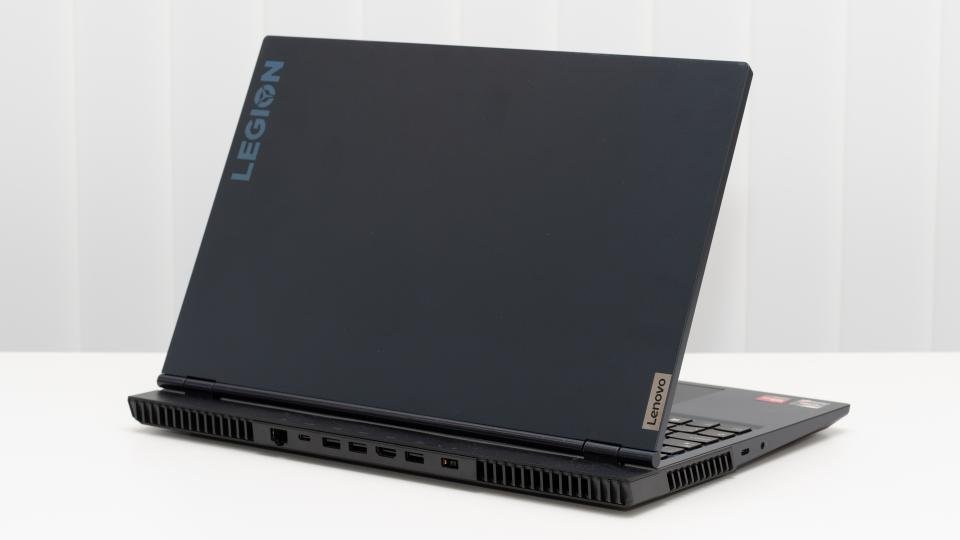 Image 2 of 6
It’s not just about the GPU, however. This particular laptop also includes an AMD CPU – the Ryzen 7 5800H in the case of the review model or a Ryzen 5 5600H model – and the laptop is being marketed under the AMD’s “Advanced Edition” banner (you can see exactly what this entails here). In a nutshell, this is a raft of system optimisations designed to get the best from laptops using AMD’s CPUs, GPUs and accompanying systems like FideltyFX Super Resolution technology and FreeSync.
None of this is going to revolutionize how well your sub-£1,000 gaming laptop performs but the theory is that it guarantees a reliable and uniform baseline performance.
READ NEXT: The best cheap gaming laptops to buy
Right now, you can pick up the Ryzen 7 Lenovo Legion 5 AMD Advantage Edition for £999 and the Ryzen 5 model for £799. Aside from the CPU, these both share the same specification, making the Ryzen 5 model better value.
The obvious competition comes from HP’s Omen 16 which uses the same Ryzen 7 CPU and RX 6600M GPU as in our review laptop. The Omen has a rather fine 16.1in, 2,560 x 1,440 display, although that GPU isn’t quite up to the task of gaming at native resolution. At the time of writing HP is selling the Omen 16 for £1,200.
MSI’s Katana GF66 is a machine I have a soft spot for because I own one. On the downside the fans are loud, the screen a bit dull and battery life poor but at a price of £899 you get an Nvidia RTX 3060 GPU, an Intel Core i7 11800H CPU, 16GB of RAM and this delivers a decent level of performance. I’ve had mine for getting on for six months and don’t regret the choice one iota.
Lastly, Acer’s Nitro 5 offers a more overtly gamey look and, right now, you can get the Ryzen 5 RTX 3060 model from Amazon for £1,132. For raw performance, it leads the budget field but the Full HD display is dull and drab, the body is plasticky and cheap-feeling, the sound system is below par and the battery is too small. It is, however one of the few gaming laptops with the facility to install a 2.5in HDD, which will appeal to some.
In terms of their looks, Lenovo’s Legion laptops have typically resided at the more understated end of the gaming laptop spectrum and this machine is no different. It’s all clad in fairly plain black and there isn’t even the slightest attempt at an RGB light show. 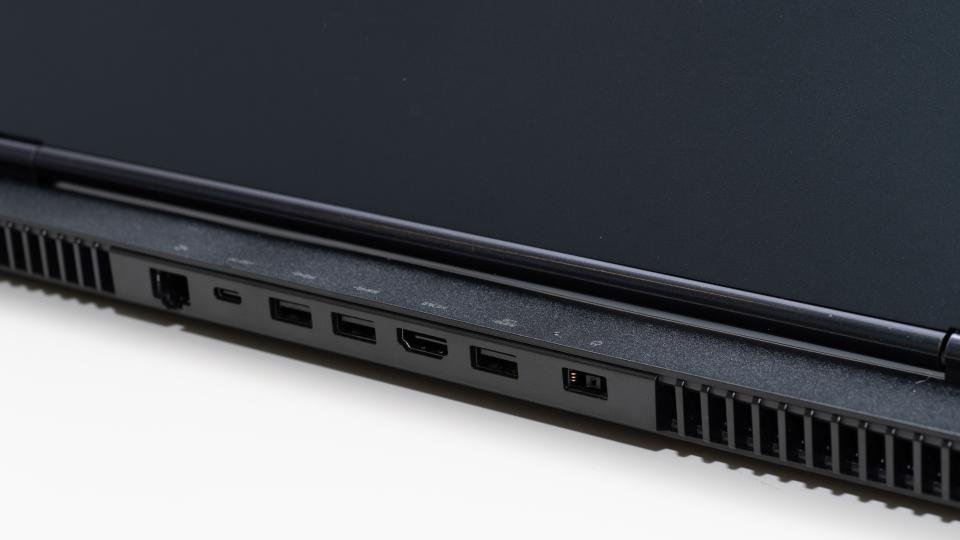 Image 3 of 6
Looks aside, though, it’s a solid and well-made machine and reasonably compact. At 2.4kg it is a touch weighty but, if you want lighter, you’ll have to pay more. Lenovo’s habit of grouping most of the ports and connectors around the back is one I continue to like, more so since I’ve taken to using a vertical stand for my laptops when connected to a monitor.
And the selection provided there is generous, too, with three 5Gbits/sec USB-A ports and a single 10Gbits/sec USB-C (supporting DisplayPort 1.4 and USB Power Delivery), one HDMI 2.1 output, Gigabit Ethernet and the DC power input. On the left edge is a 3.5mm audio jack and another Type-C port (although you can’t charge via this port), while on the right is a fourth Type-A port and a switch to disable the webcam.
Whip the rear panel off and you’ll discover three removable metal plates. One covers a spare 2280 M.2 SSD slot, another the wireless card and the pre-installed 2240 SSD, while the last protects the two 8GB SODIMM RAM modules. Upgrading is not going to be a problem.
Wireless communications are handled by a Realtek MT7921 Wi-Fi 6 card, while the 512GB SSD is a Samsung model which managed solid if unspectacular sequential read and write speeds of 2,723MB/sec and 1,651MB/sec respectively.

The membrane keyboard is solid and well laid out and even includes a numeric keypad, which isn’t a common feature, even on 15.6in laptops. The keyboard backlight is a simple all-white two-stage affair, which some gamers may think is a little basic, and at 1.5mm, the key travel is a little shallow. That said, three solid hours of Metro Exodus didn’t leave me cursing it and I appreciated the cursor keys being set a little apart from the rest of the keyboard. 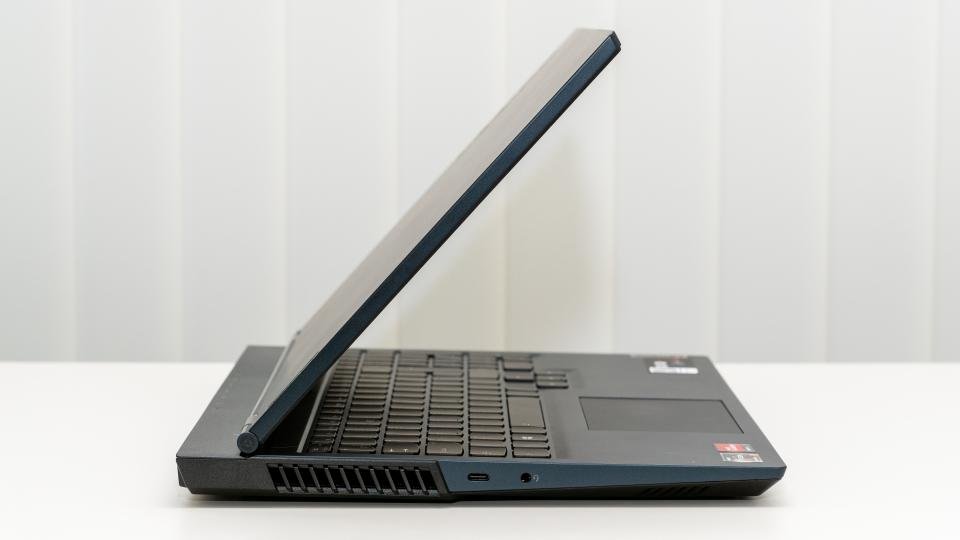 Image 4 of 6
The plastic 105 x 70mm touchpad is offset to the left by 40mm to make room for the arrow keys but is otherwise hard to fault. It’s a one-piece affair, is pleasant to the touch and has a clean and sharp click-action at the bottom.
The 720p webcam is not quite as bad as I expected, either, being less noisy and rather more colourful than some I’ve encountered. Video can be recorded at a maximum of 30fps while the highest resolution still images you can capture are 1,280 x 720.
Buy now from Currys (Ryzen 5)Buy now from Currys (Ryzen 7)
There’s nothing exceptional about the Legion 5’s display. It has a 1,920 x 1,080 resolution, 144Hz refresh rate and, well, that’s it. A higher-resolution display would be beyond the GPU’s capacity to fully utilise.
At 370cd/m2, it’s a brighter panel than you usually find on budget gaming notebooks, though, and it’s colourful with 96.5% sRGB coverage and 100.7% total sRGB volume. The average Delta E Colour accuracy is just the wrong side of two at 2.24 but, again, I’ve seen numbers twice that high on Acer Nitro laptops so we need to keep things in perspective. 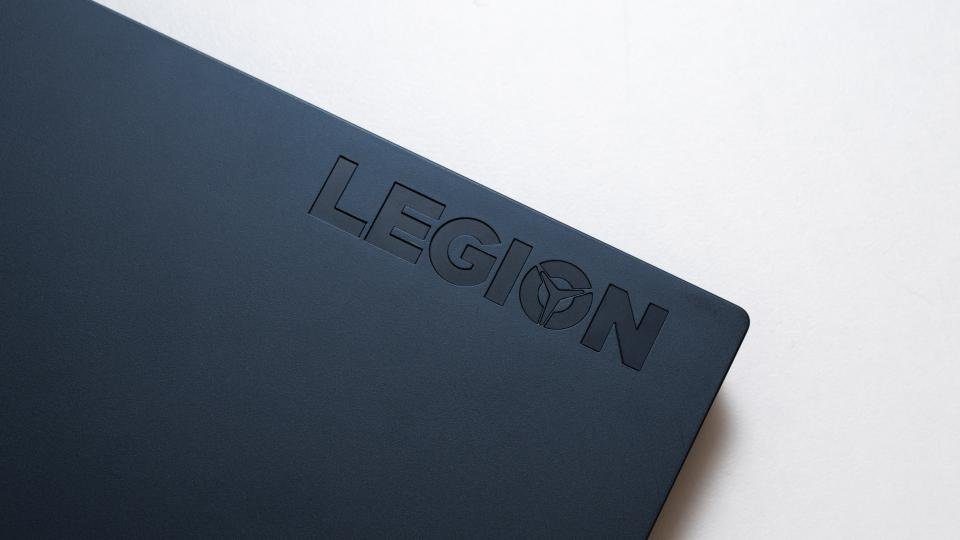 Image 5 of 6
What sets this Legion 5 apart from pretty much every other budget gaming laptop I’ve tried is that it has a multiplexer or MUX switch. What this little piece of brilliance does is connect the RX 6600M GPU directly to the display without involving the integrated (in this case Radeon) graphics chip in proceedings. The benefits are higher frame rates and better image sync but the downsides are increased power demand and the necessity to reboot when you want to switch back into hybrid mode.
The same goes for the sound system is very good indeed. I measured the average volume from a pink noise source at 1m at 73dB while a music source peaked at 85dB which is on a par with much more expensive gaming laptops like the Asus ROG Strix Scar 15 and 17 machines that we tested recently. The sound is well balanced with a reasonable amount of bass and there’s no distortion even at maximum volume levels. It lacks the body to do full justice to music playback but, at this price, I’ve heard much worse.
READ NEXT: The best gaming keyboards
The release of Intel’s new Alder Lake chips has swung the CPU performance advantage back from AMD to Intel but that’s not to say that AMD’s octa-core Ryzen 7 chips should be overlooked.
The Ryzen 7 5800H processor in our review machine has a base clock of 3.2GHz but can hit 4.4GHz with its running shoes on. This Legion 5 also comes fitted with 16GB of dual-channel DDR4 RAM as standard while the RX 6600M GPU has 8GB of GDDR6 vRAM. That’s a recipe for some pretty solid performance.
As you would expect, given the identical CPU and GPU, the Ryzen 7 Legion 5 performs very similarly to the HP Omen 16. In our bespoke multimedia benchmark test, the Legion 5 scored 315 to the Omen’s 322 which is within the margin of error. The same is true of graphically-intense productivity tests. The Legion 5 five managed 65.4fps in the SPECviewperf 3dsmax 3D rendering test to the Omen’s 66fps, both tests running at 1080p.

When it comes to gaming, however, the Legion has a small advantage thanks to that multiplexer switch which links the GPU directly to the display without the Radeon graphics chip sticking its nose into proceedings.
Running the Metro Exodus benchmark at Extreme, Ultra and High returned frame rates of 25.3fps, 43.1fps and 56.7fps respectively but you can always tweak the video settings to increase the frame rate: knocking the video detail down to Medium and ray-tracing quality to Normal saw the frame rate jump to 90fs. For the record, that’s almost twice as fast as an RTX 3050 machine (for example, the otherwise impressive Dell Inspiron 16 Plus).
At its highest details settings, with ray tracing set to medium, the Shadow of the Tomb Raider benchmark ran at 77fps. The Wolfenstein: YoungBlood Riverside benchmark, with the highest Mein Leben preset enabled but no ray tracing enabled (because it uses Nvidia’s API rather than Microsoft’s DXR), ran at 159fps. Lastly, the Hitman 2 benchmark scored 45.6fps with SuperSampling at 2 and 97.2fps with it set to 1. These tests were run at 1080p.

All those scores, aside from Hitman 2, are around 10-15% higher than the results from the Omen 16, which doesn’t have a MUX switch. And, as with all the other Legion machines I’ve tested, I was impressed by how cool and quiet the laptop remained, even after prolonged and intensive gaming sessions.
However, like the Omen 16, the Lenovo Legion doesn’t get much change from its large battery, lasting 7hrs 38minutes from an 80Wh (5,210mAh) battery in our video rundown test.

Yes, Lenovo Makes Earbuds—and They're Better Than I Expected – Gizmodo