By Alexandra Del Rosario
TV Reporter
Retrospective special The Price Is Right Celebrates 50 Years on CBS was the big winner of the final Wednesday primetime of 2021.
Earning a 0.6 rating in the 18-49 demo and 4.95 million viewers, the repeat airing of the CBS special led the pack as the night’s highest-rated and most-watched program. Not too shabby for a rerun, considering that previous repeat broadcasts haven’t earned beyond a 0.5 demo rating since the primetime holiday break started. This is the second week in a row that CBS has won Wednesday primetime with The Price Is Right-related content. Last week, CBS ruled Wednesday with The Price Is Right at Night (0.5, 4.90M).

That said, other networks’ repeat-filled primetime slates on Wednesday didn’t perform as well. Following its black-ish marathon on Tuesday, ABC’s Wednesday schedule thrust The Wonder Years into the spotlight. At the top of Wednesday’s six-episode marathon, The Wonder Years earned a 0.3 demo rating and brought in 2.11 million viewers.
NBC opted for rerun episodes of its various Chicago series, starting off with Chicago Med (0.2, 2.64M), followed by Chicago Fire (0.3, 2.52M) and Chicago P.D. (0.2, 2.41M). Chicago Fire bested The Wonder Years and the CW’s World’s Funniest Animals to top the 9 p.m. hour. In the following hour, Chicago P.D. was just slightly eclipsed in demo rating by a S.W.A.T. repeat on CBS (0.3, 2.30M).
Fox’s Wednesday primetime consisted of a repeat showing of Gordon Ramsay’s Road Trip (0.2, 0.93M).
Heading into New Years Eve, Thursday Primetime will offer up more repeats, a showing of Frozen on ABC and Fox’s All Madden, a tribute to recently deceased NFL coach and broadcaster John Madden. Madden died Tuesday, he was 85. 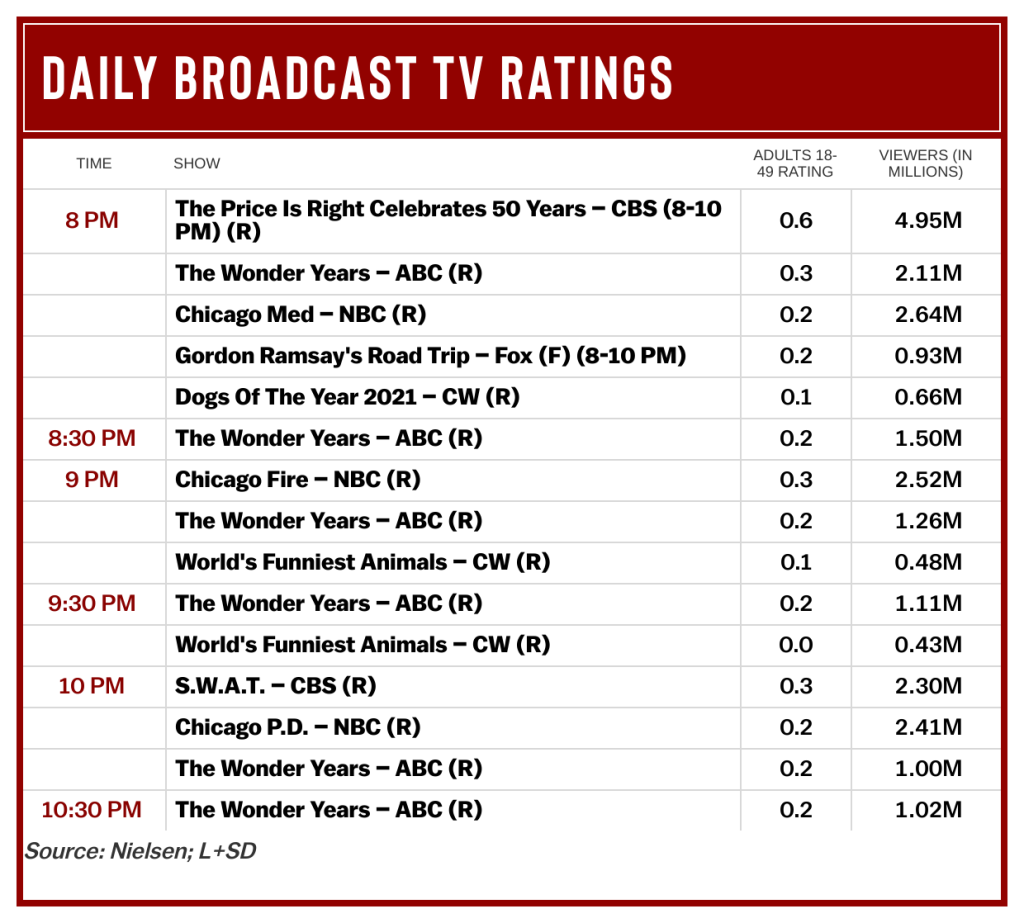 Subscribe to Deadline Breaking News Alerts and keep your inbox happy.
New and returning series on broadcast, cable and streaming
Series that made it or didn’t make it in 2020-21
Broadcast networks’ fall lineups and schedules
Signup for Breaking News Alerts & Newsletters
Get our latest storiesin the feed of your favorite networks
We want to hear from you! Send us a tip using our annonymous form.
Sign up for our breaking news alerts
Deadline is a part of Penske Media Corporation. © 2021 Deadline Hollywood, LLC. All Rights Reserved.