Key facts:
BTC price predictions are 2 to 6 times higher than the current price.
At the current price, bitcoin has appreciated 62% so far in 2021.
In a continuation of the correction that began on November 10, after reaching the all-time high of USD 68,600, the price of bitcoin fell to USD 46,600 on Tuesday, December 28, representing a decrease of 32%. In the year 2021, this setback is the largest since the fall of mid-April last, which was 54%, when the price reached USD 29,400 on July 21.
Since the beginning of 2021, in the middle of the bull run that began in October 2020, many analysts and traders, among other market participants, advanced estimates of the price of bitcoin for the end of this year that went beyond USD 100,000.
One of the most recognized bitcoin market analysts, Willy Woo, stated last March that bitcoin was registering the largest supply shock in its history, as a result of the increasing accumulation on the part of long-term holders. At that moment, the analyst raised his BTC price estimate for the end of 2021, from $ 250,000 to $ 300,000, as reported by CriptoNoticias.
Woo modified his position at the beginning of the year on the culmination of the current cycle at the end of 2021 and predicted that the current bullish cycle would continue until well into 2022, as we report in this publication. The fundamental parameters of the blockchain they do not confirm that we are in a bearish phase of bitcoin, since the maximum of the cycle has not yet occurred, asserts the analyst.
The analytical firm Messari predicted at the end of last February that, if the price of bitcoin adhered to the growth pattern of the 2017-2018 cycle, its price could end the year close to USD 300,000.
Messari’s hypothesis was based on the fact that the current bitcoin cycle started with the December 2018 low, close to $ 3,400. For the cycle that culminated in 2018, Messari chose April 2015 as the starting point.
The two trajectories overlap and it can be seen that they coincided significantly until the end of February of this year. As can be seen in the previous graph, the curve for the past cycle (in blue) indicated that, if the current price followed the same growth pattern, we would have a price of USD 292,000 in December, when in fact it is more than six times lower than that figure. 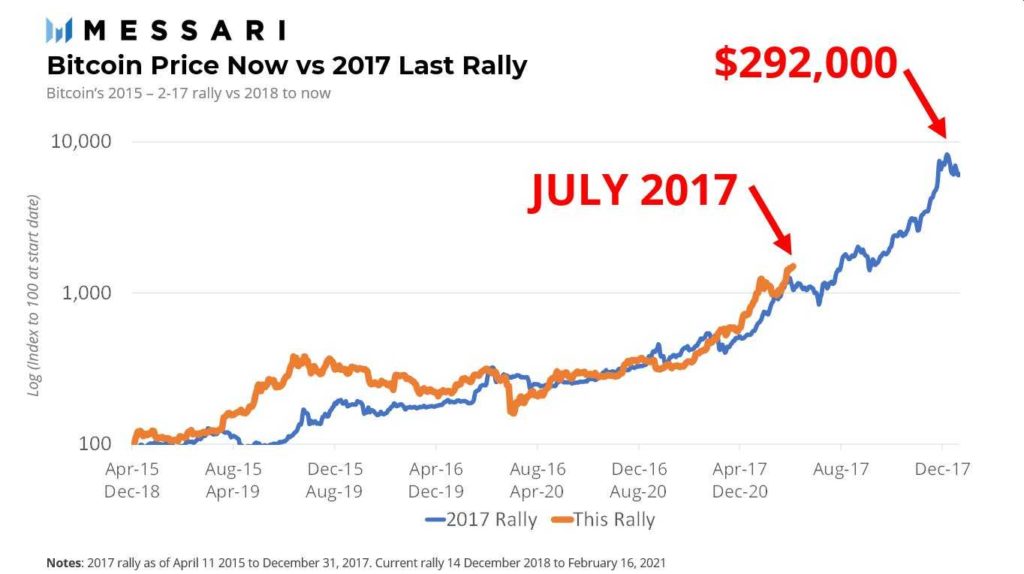 Overlap of the current bitcoin price cycle to the December 2015 to April 2018 cycle. Source: Mira Christanto, Messari.
Other analysts, who did not focus on the end of 2021 as a specific date for their predictions, refer to price levels for bitcoin close to half a million dollars in a few years.
The Argentine lawyer and former treasurer of the Xapo company, Carlos Maslatón, predicts a bitcoin price between USD 78,000 and USD 110,000 for the coming months. But, in addition, it shows numerical precision in its prediction for the next 2 or 3 years; Maslatón affirms that in that period bitcoin will reach USD 399,759, as we report in this medium.
For his part, Anthony Scaramucci, founder of SkyBrigde Capital, and former director of communications for the White House, said in mid-November that he recommended buying bitcoin, even at the current price, above $ 60,000. He insisted on that recommendation because he estimated that, by mid-2025, the price of the first cryptocurrency would reach $ 500,000, as reported by CriptoNoticias.
After a modest recovery, bitcoin is trading at $ 47,867, bringing its annual return, at the time of writing, is 62.8%, as reflected by the CryptoNews price index.
Key facts: The United States leads, for now, the world ranking of hashrate. El Salvador, Argentina and Paraguay are ready…
Key facts: It is an option that allows you to confirm transactions faster by increasing the commission. Although it is…
Billy Markus the co-creator of Dogecoin, who goes by the username Shibetoshi Nakamoto on Twitter, has revealed that he owns…
By the end of 2021, the price of Bitcoin falls back below the $ 50,000 mark and hits less than…
Copyright © 2017 JNews.
Copyright © 2017 JNews.