Who needs WASD when your laptop is small enough to function as a gaming controller?!
Meet the GPD Win Max 2, a compact laptop that’s great for functionality and for fun. The laptop comes with a 10.1-inch touchscreen display, making it roughly the same size as an iPad, and features a full QWERTY keyboard for work. However, right above the keyboard lie a pair of magnetic flaps that when opened, reveal joysticks and D-Pads that let you play games on the Win Max 2 as if it were some overgrown Nintendo Switch or Valve Steam Deck. As if that wasn’t impressive enough, the Win Max 2 also comes with AMD’s latest eight-core Ryzen 7 6800U processor and Radeon 680M graphics, up to 32gb of RAM, 2Tb of storage, and an impressive 5 hours of battery life while gaming!
Designer: GPD 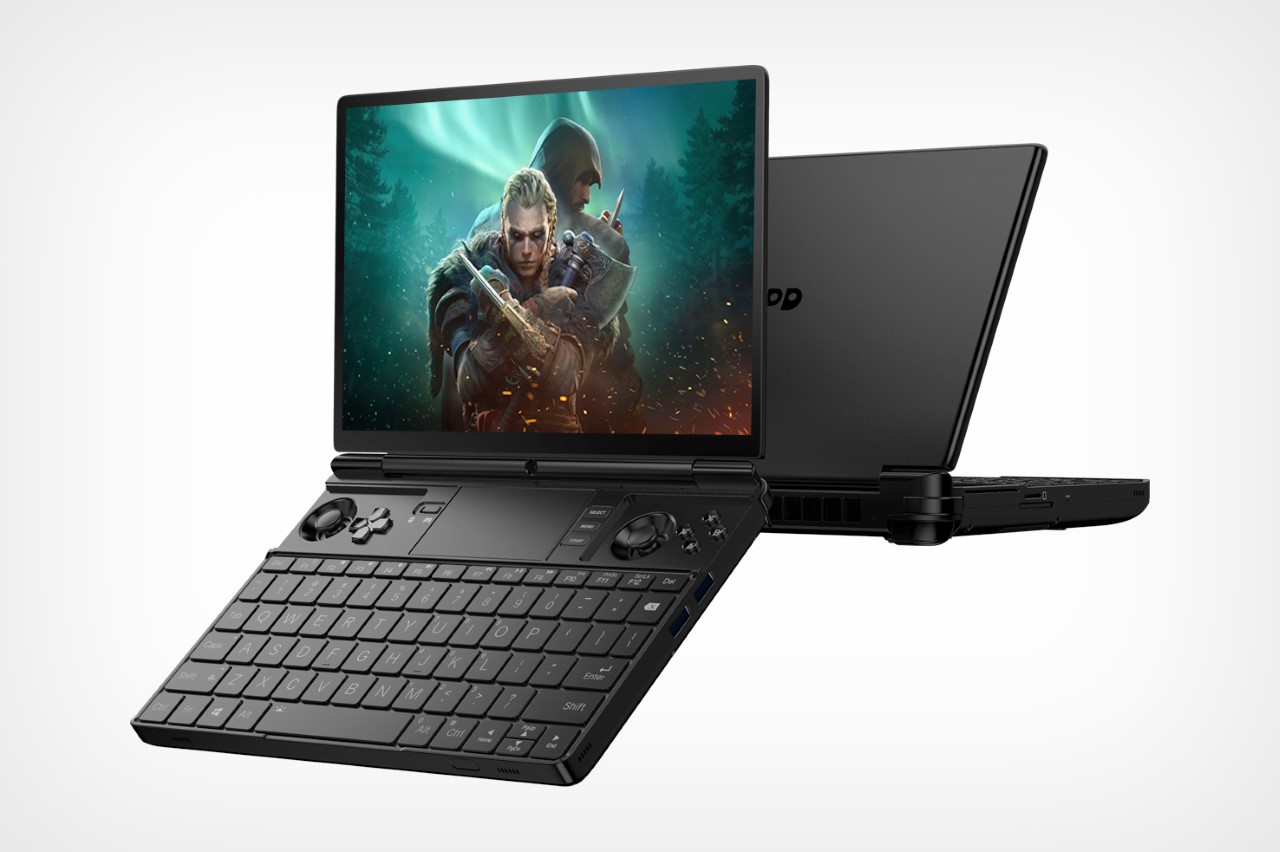 The GPD Win Max 2 is a small but powerful laptop that will either have mass appeal or niche respect. However, given exactly what an innovative little beast it is, it deserves space on this platform. The laptop, as I mentioned, is rather compact, and comes with a display sporting minimal bezels to maximize screen real estate. As a workaround, however, the Win Max 2 doesn’t ditch the webcam, but rather positions it on the hinge, facing upwards (this may result in a weird angle, but that’s the price you pay). The display also supports 10-point touch, and active pens with up to 4096-level pressure sensitivity (including Surface Pen). This effectively makes the Win Max 2 a hybrid between a regular laptop, a gaming laptop, and even a tablet PC! 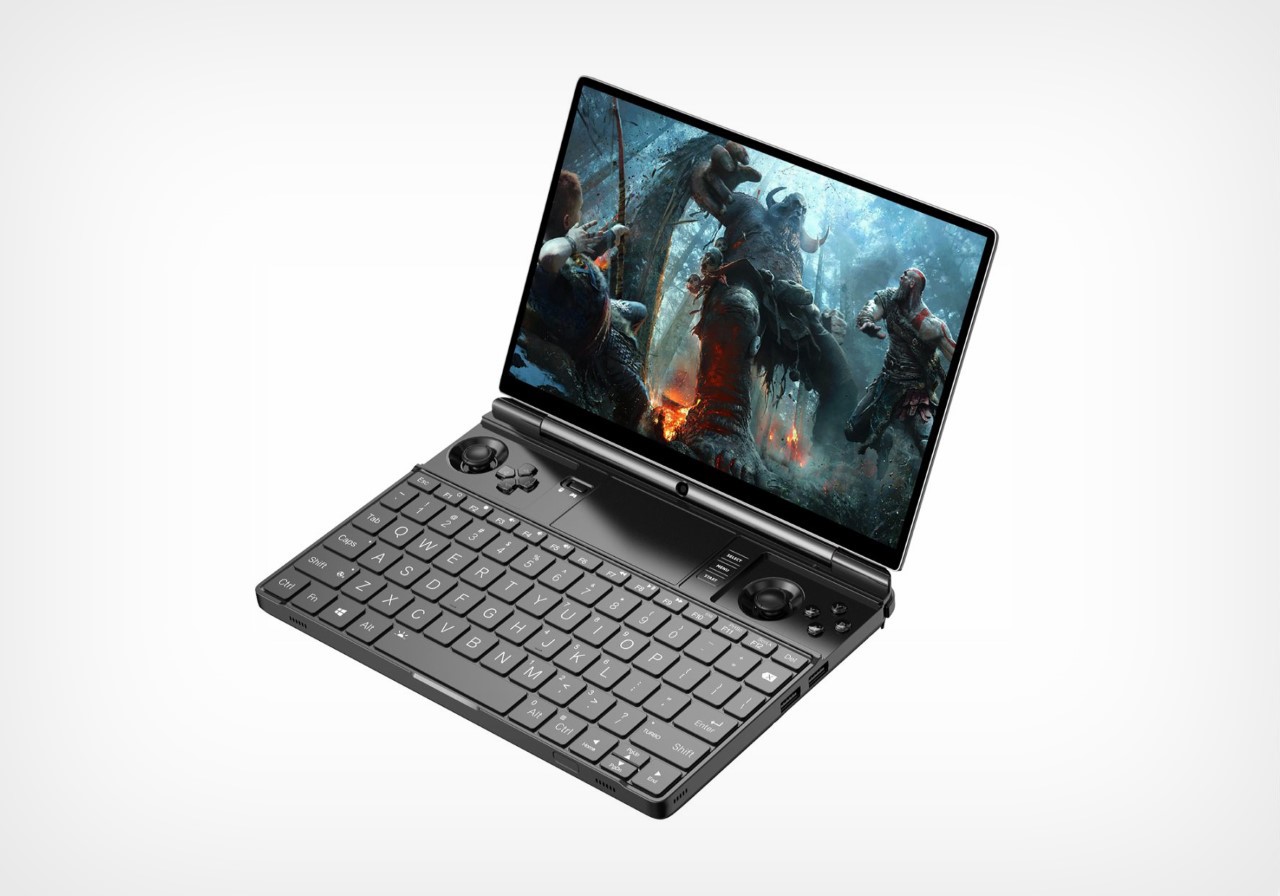 The laptop has everything you’d possibly need (aside from a number pad). It has a QWERTY keyboard complete with function keys, and even comes with a trackpad located right on top of the function row (as opposed to at the bottom). On either side of the trackpad lie the gaming controls, accessible by flipping open the magnetic flaps… and if you’re wondering if that’s all, the Win Max 2 also has shoulder buttons located on the top left and right corner, as well as trigger buttons on the laptop’s base. You can toggle between using either the trackpad or the controllers by flipping a switch on the top. 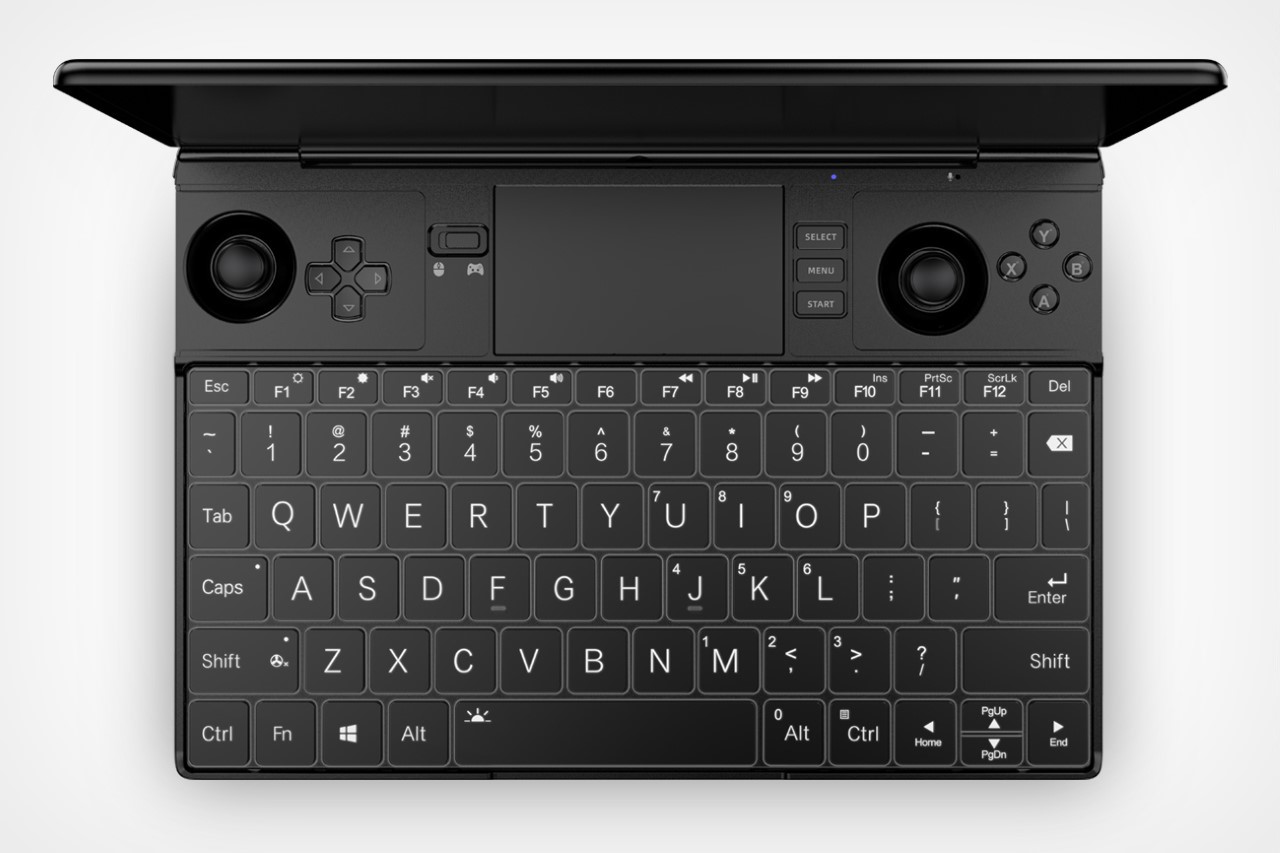 The Win Max 2 is small, but that doesn’t mean it compromises on anything. The laptop has a backlit keyboard, 3 USB-A ports, an HDMI port, two USB-C ports (with one of them being Thunderbolt 4), a 3.5mm audio input, multiple card readers, and get this… even a biometric unlock button that lets you secure your laptop with your fingerprint. To ensure that its gaming chops are up to par with other laptops, the GPD Win Max 2 also has loudspeakers built around the periphery of the laptop for a rich, booming sound. 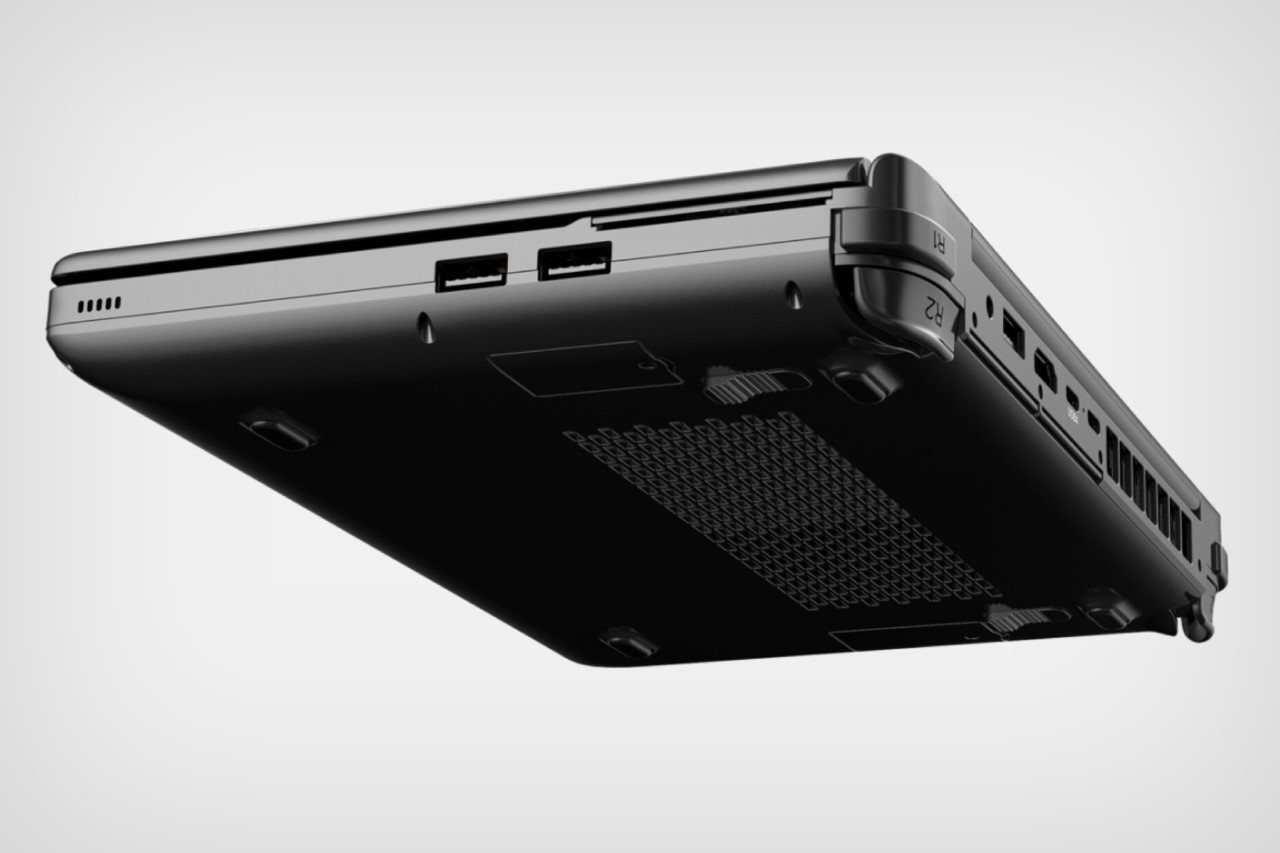 You can get the Win Max 2 in both Intel and AMD variants (12th gen i7 and Ryzen 7 6000 respectively). The laptop’s architecture sports 8 cores (16 threads) with RAM capabilities between 16 and 32 Gb. You can choose to have an internal storage of 1Tb to 2Tb, and if that just doesn’t quite cut it, there’s also a M.2 2230 slot on the back of the Max 2’s motherboard that can be used to bump up your storage. A 67Wh high-capacity battery gives you 5 hours worth of continuous gaming, or up to 14 hours of office work – although those metrics need to be verified rather than accepted as gospel. 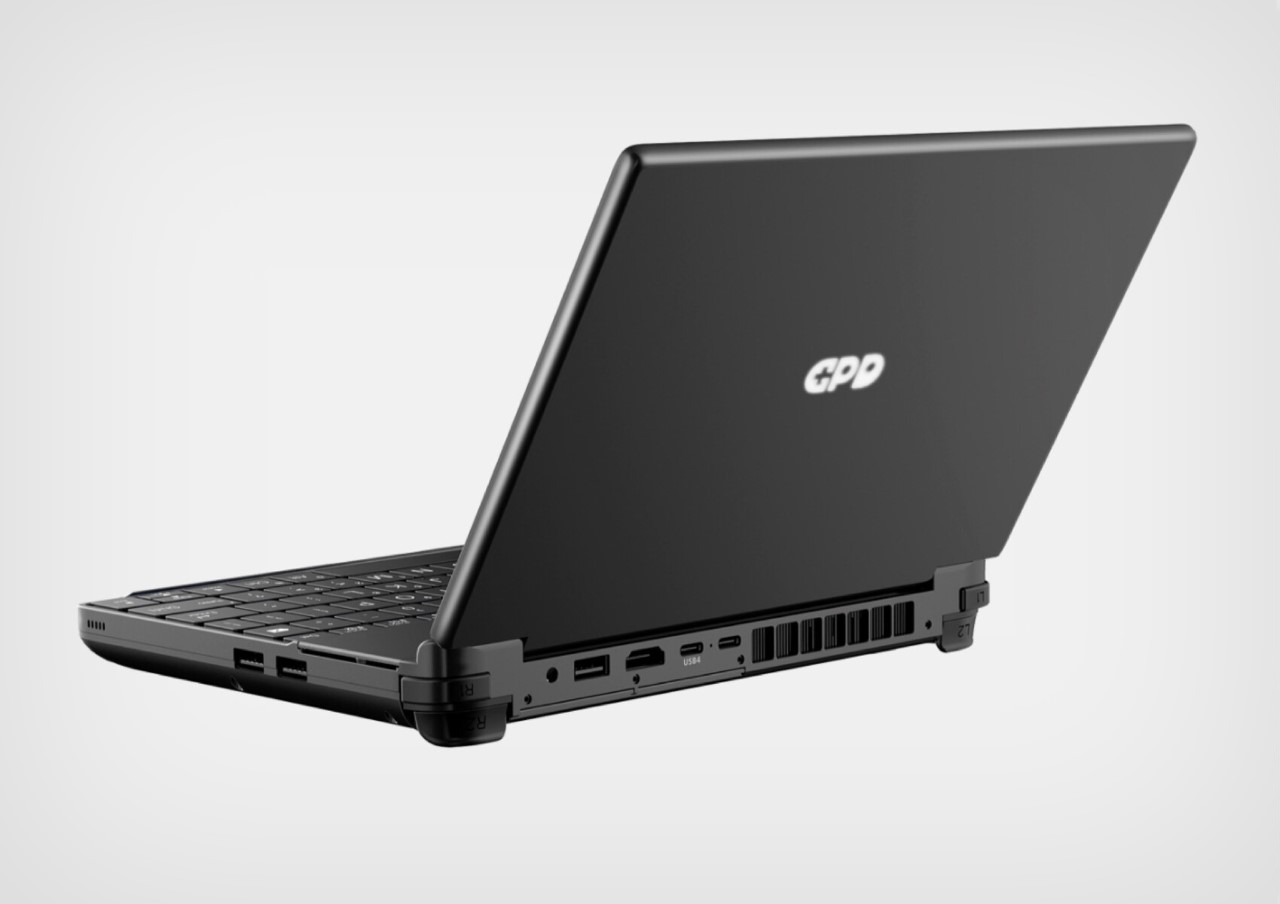 All in all, the GPD Win Max 2 doesn’t really hold back in any department. It’s a tiny powerhouse that’s designed for portability, functionality, performance, and versatility. There’s no stone left unturned with this little laptop, barring probably the presence of an ethernet port, which gaming laptops usually always include. However, where it lacks in one mere port, the Win Max 2 makes up by being volumes better as a gaming device.
For starters, it’s portable, which means you aren’t tethered to one spot while you game. Designed to be used as a handheld machine, the Win Max 2 comes with an abundance of controls, and even sports a 6-axis gyroscope on the inside, which lets you tilt the laptop while playing games that require motion sensing.
The laptop isn’t readily available yet. In fact, there aren’t too many prototypes to judge its credibility by, apart from a handful of YouTube reviewers. However, GPD plans on taking this beast to Indiegogo, where enthusiasts will help fund the project into reality. Owing to the laptop’s highly customizable nature, the Win Max 2 has a flexible price range, starting at $899 and going all the way to $1299. Not only do you get to choose between Intel and AMD internals, but you can also play with RAM and storage capacity, along with the display resolution, choosing between the regular 1080p display, and a better 2K display (although there’s no mention about the refresh rate). 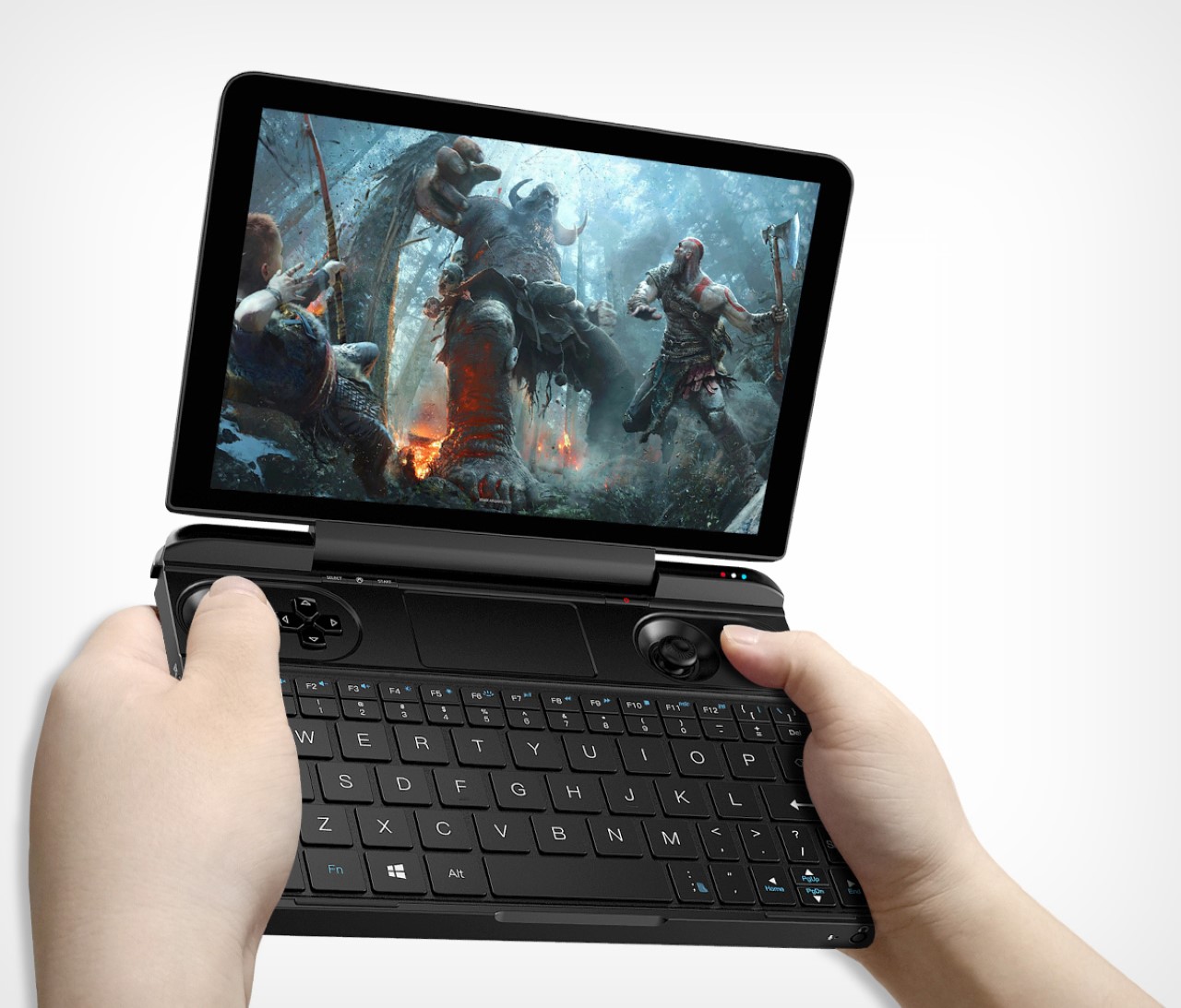 Portable chargers or power banks are a dime a dozen these days, including the new breed that sports wireless charging capabilities. They might come in…
Some may say it adds a touch of magic to your interior space! Meet Evaro… a light bulb lamp that’s clearly living in the year…
When you’re the world’s biggest brand when it comes to PC gaming peripherals, it definitely speaks in your favor when your building looks exactly like…
LG is a brand that we can always trust when it comes to smart appliances. Forget about smartphones because the company has discontinued that direction….
The Backbone One is pretty appropriately named for the product that it is. After all, it’s probably one of the only bespoke controllers designed SPECIFICALLY…
Whether you grew up gaming, chances are your parents use the line “why don’t you do something with your life!” at least once. With the…
We’re an online magazine dedicated to covering the best in international product design. We have a passion for the new, innovative, unique and undiscovered. With our eyes firmly focused on the future.
Editorial Standards and Ethics / Privacy Policy

The exact location of every police mobile speed camera operating in Wales in June, 2022 – Wales Online